Tucked into a grove of centennial oaks atop a rise that is a slight quarter mile off Route 100 in Pulaski County, Virginia, is a beautiful old house. For readers of CAIRNAERIE, it should look very familiar. 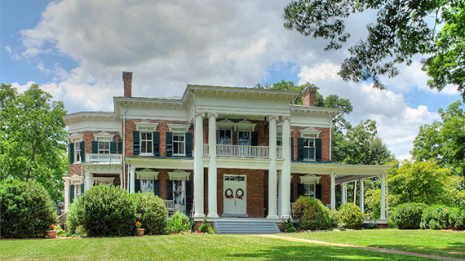 Chimneys punctuated the steeply pitched slate roof and rose as if large birds were perched atop. Ornate cornices and dentil moldings framed red brick walls. Long windows stretched from the floor to the ceiling of a wide, wrapping porch where faded paint was peeling from decorative balusters. At the far end of the porch, an empty swing, animated by the breeze, squeaked as it swayed on rusted chains. In the pungent autumn air, it looked rather forlorn. Only smoke curling from one chimney and the light from a single window suggested the house was occupied. Otherwise, he might have thought it abandoned… 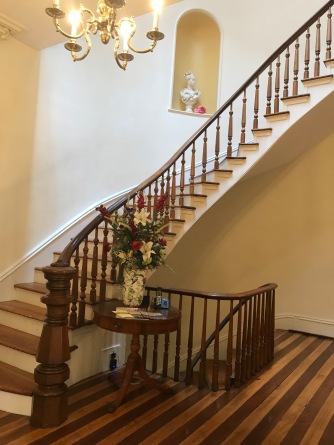 The home’s real name is Rockwood, and it has been a source of curiosity and imagination throughout my life. It was not hard for me to picture the fictional Geneva Snow and her family living there. For me as an author, it was too rich a setting not to use.

In the aftermath of the Civil War, around 1873, Rockwood was  built out of brick formed from the surrounding soil and fired on site. It has eight bedrooms, two large parlors, a dining room ending in a large bay window, a floating staircase that curves from the second floor all the way to the English basement, and a belvedere. Throughout the house  elaborate crown moldings line the high ceilings, and 65 tall windows, some with Jefferson style openings, frame stunning mountain views. It is the definition of elegance.

Among the house’s most striking features is floor in the front foyer.

the room’s perimeter toward the center where it formed a striking, six-pointed star.

The star has long fascinated me and the hundreds of relatives and visitors who have stepped through Rockwood’s front doors. For my novel, the star was too good a spot not to hide a secret, and the house was the perfect setting—a ready-made and enchanting “place.”

Today, the home is owned by my cousins Frank Drummond and his mother, Sarah. Frank and his wife, Rochelle, began operating the house as a bed and breakfast almost 20 years ago. Since then, Rockwood—the epitome of Southern hospitality—has welcomed guests from all over the world.

To see more pictures of Rockwood, visit the website: https://www.rockwood-manor.com

Two novels, two different eras in American history, more than a few characters worth getting to know….

Fleuringala…..When young Ruby Glory is abandoned by her no-county mother, Tack Pittman of the Lauderville Pittmans steps in. But his good deeds have consequences ….Available now on Amazon

In a sweeping historical fiction, CAIRNAERIE unfolds across the landscape of Civil War Virginia and the 1920s eugenics movement that follows.

In a world where gentility is the lifeblood of society and some rules are never to be broken, Geneva Snow dares to love. Her decision shatters her steadfast father, who hides her away in his mountain estate, CAIRNAERIE. After years of solitude, she emerges, hoping to leave a legacy worthy of the father she loved and lost. She engages a young history professor for help, but when the forces of malevolence and revenge converge, her long-kept secret is exposed. And for a second time, Geneva faces a calamity of her own making.